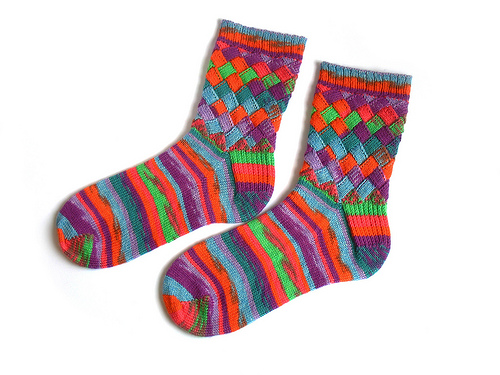 Behold the Harlequilt Socks, in as highly saturated a combination of colours as Kaffe Fasett ever did conceive.

I am extremely happy with how these entrelac socks have turned out, but I am glad that they are finally complete. I did feel the project started to drag on a bit after about the fifth entrelac row of each respective sock, and actually found myself counting down until the end of the entrelac portion square by square, seeing the new task of turning the heel as a refreshing new task before sprint-knitting through the rows of stockinette to a short row toe. 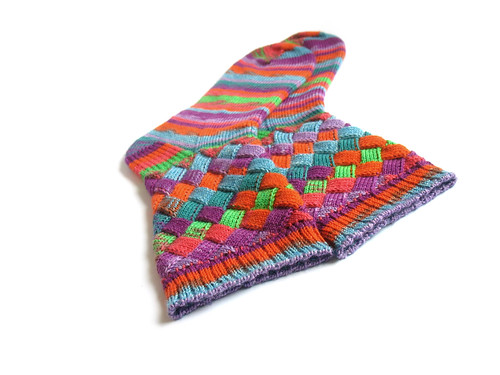 This project is my first flirtation with entrelac, and thought the technique is quite engaging, the novelty of picking up stitches for each square wore off after the first sock. Entrelac is not difficult. If you can knit, purl, decrease and pick up stitches, then you can do entrelac. Once the foundation row of triangles have been completed, the structure is revealed and you suddenly have an epiphany over the logic of the technique, and it all falls quickly into place. Entrelac is just stockinette stitch knitted in small blocks. In this case, very small blocks. Entrelac isn’t time consuming because of complexities of this form of knitting, but because, when working in 6-stitch blocks such as the ones in this pattern, you have to pick up a stitch for every twelve you knit. You also have to turn your work every six stitches. You spend more time turning your work than you do actually knitting, so an ability to knit backwards can be a great time-saver, though if you are like me getting the yarn set up in a position that makes backwards-knitting comfortable takes just as long again… 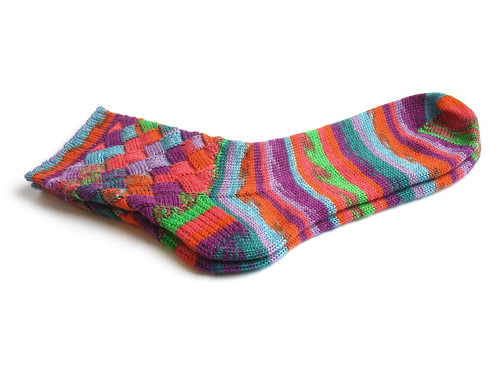 Despite the time-intensive knitting that I found these socks represented, I do not regret the added effort needed to complete them. They are probably the brightest and boldest socks that I will ever make, and Craig has been asking over their progression every day or two and declared them to be ‘the best socks I have ever knit’ when I was only a third of the way into the first one. I started each sock at the same point in the colour progression of the yarn, and I am overjoyed at how well my tension behaved during relaxing knitting sessions in front of the TV in the evenings, through discussions whilst on lunch break and whilst knitting under stress. Each rectangle corresponds perfectly with its partner on the neighbouring sock, matching from the socks of the cuff, through the heel and to the tip of each toe.

The yarn threw up some interesting effects, too. Many of the stripes of this colourway change shade at a distinct and straight line, but at some colour junctions the new shade creeps in, making a wavy, patterned edge as you can see in the stockinette foot portion. Whilst knitting the socks it started to become apparent that all of the solid colours were lining up at the front of the sock and these intermediate waves of broken colour were all pooling at the back. What’s more, at the point where my 2×1 ribbing stopped to begin the foundation triangles, the yarn changed to a bright fuschia for the decrease round, before swiftly changing again, which give the impression of a line of little overhand stitches joining the ribbed cuff to the main body of the sock: 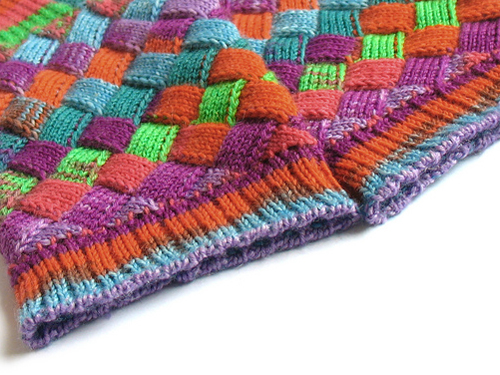 I didn’t like this at first, but as the lines of rectangles began to build like a patchwork quilt, with the appearance of little ‘stitches’ where one colour would show through the decrease stitches that bind each tile to the next, I thought that these little chance quirks that came about because of the union of this particular yarn and this pattern were quite charming, and so suggested the name ‘Harlequilt’.

Pattern: Annetrelac Socks by Sandy Beadle
Yarn: Regia Kaffe Fassett Design Line Crazy Colour in the colour way ‘Zany’
Author: Mimi
Filed Under: Craft, FO, knitting, yarn
Tags: Eskimimi Knits, socks
A Knitting Bias? Survey For Knitters and Crocheters.
And The Results Are In – What Did The Survey Tell Us?