FO: And I’m Wired For Sound

You know that someone has their finger on the pulse of modern style and taste when the reference Cliff Richard lyrics in their post titles.

The knitted vine you see below is my attempt to stem the slow, sad destruction of my faithful aural friends – my ear buds (or ear buddies, as I prefer to think of them). 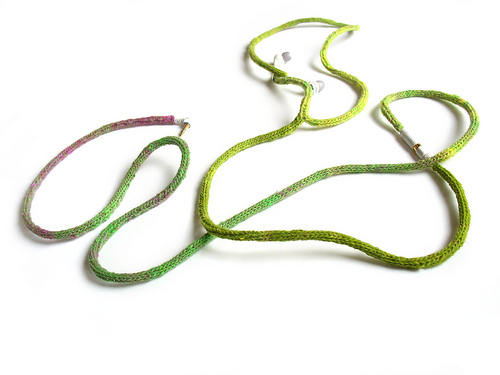 These headphones have been my companions for many years now. They have outlived portable CD players, 1st generation iPod nanos and are now on to their second iPod. They have filled my head with such nonsense as the Flight of the Conchords, and played the complete catalogues of Simon and Garfunkel and David Bowie more times than they’d probably care to relate. They have also played hundreds and hundreds of hours of audiobooks as I have knitted and travelled over these past two years. So, it is probably no wonder that they look a little shabby by now.

Actually, they’ve had a few scrapes recently. Firstly, I foolishly had them dangling from my handbag when I went to visit someone with a new kitten. The kitten either absolutely loved them or was furious with their presence in the house – I couldn’t quite tell among the frenzied ball of activity that the cat and headphones soon became. Not long afterwards, possibly prompted by the recent feline-trauma, the earphones tried to commit suicide by wrapping themselves around the roller of a high-powered vacuum cleaner. With bare wires in places, the casing sheared off in others, the wires were patched up with electrical tape and love, but the headphones go their revenge. During one of their bids to join the graveyard of electrical accessories, the hard plastic casing that shields where the main wire divides into two cracked and part of it was lost, leaving a razor edge that Gillette could only wish they could get on their blades – any one of the 20 now compulsory on any ‘shaving system’.

This piece of plastic seeks to cause daly damage to anyone still wishing to traumatise these headphones with their bad taste in music from the 70s, and that person is, invariably, me.

So, I am knitting these headphones an iCord wire cosy in a bid to stop, or at least slow, the destruction. The headphones get to approach their retirement years in snug comfort, and my hands are now safe from that piece of vengeful plastic. 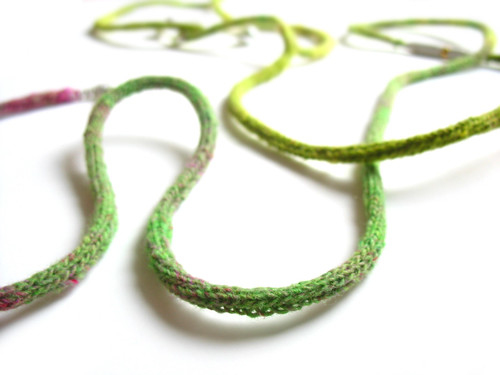