A Knitting Bias? Survey For Knitters and Crocheters. 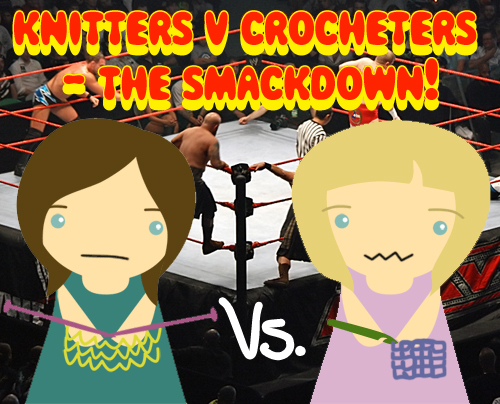 I am often reading on the forums of Ravelry crocheters bemoaning the bias in the fibre world that seemingly results in crochet being seen by some to be a lesser craft to knitting. To be honest, I haven’t noticed it that much myself, but as I have been told in reply ‘ah, but you are primarily a knitter therefore you are not sensitive to the jibes and comments’. This may be true, though in general I have seen good support of both crafts (which is not to say that I think they both receive the same amount of coverage – as far as I can tell there are more knitters than crocheters on ravelry and other such gathering places for fibre enthusiasts, so I’d assume that the greater number of patterns, etc for knitting is a direct reflection of that – but am I right in those assumptions?

As for my own feelings on the matter – I think that there is plenty of room in the fibre-crafts world for both past-times. I learned to crochet only shortly after (a couple of weeks, maybe) learning how to knit. I have definitely advanced further in my knitting than my crochet in that time. I prefer the fluid fabric of my knitting for most item, but I appreciate the rigidity of crochet can benefit the construction of many garments such as hats. The popularity of Japanese pop-culture and the amigurumi explosion also gives good support to crochet being king of the soft toy castle, but in general I prefer the smooth surface of stockinette and the manipulations of knitted lace and cables to the fabrics generated by crochet in many instances. This is not craft snobbery, and I do not look down on crochet, it is just a personal preference of aesthetics and form, and I think that must be separated away from the idea of a craft bias. An amigarumi maker may extoll the virtues of their craft in the formation of their adorably cute creations, but again this isn’t snobbery against knitted forms, just the personal preference of one way of creating a fabric for a specific function over another.

I am still confused about to what extent members of the knitting community do ‘look down’ on crochet as a craft, and how keenly this is felt by crocheters, so I have written out this short and completely anonymous survey to hopefully just break the surface of opinion. As it is completely anonymous (the clicks are registered as numbers and nothing more) you can be totally honest, so if you are a knitter that hates crochet, vent your frustration with a click. Conversely, if you are a crocheter that thinks that knitted things are soooo 2005, and hate the way crochet is treated, anonymous clicking awaits.

If you have any comments to make that aren’t covered by the survey, please feel free to leave them in the comments section, though obviously if you fill out the field with your name, then that is less anonymous – though this still cannot be linked with your poll results. I’ll close this on the 8th of February, and by then hopefully there will be enough results to make a fancy graph or two…

The survey is now closed. There were 704 (!) responses in total. I shall try and make a few graphs and publish the full results tomorrow, as it will take me a while to compile the information. Thanks to all that took part

1 thought on “A Knitting Bias? Survey For Knitters and Crocheters.”