I have dabbled in the field of knitting magazines a little since I started knitting, but I’m sometimes frustrated by either the lack of editorial quality (the first magazine I bought was so riddled with errors throughout the one pattern I attempted that it was actually impossible to knit) or sometime what seems like a reliance of style over substance, with high-priced, gorgeous glossy magazines being composed of only a few patterns, the majority of which are re-printed from pre-existing publications. Sometimes, though, you spot a pattern which you know you just have to knit.

The Monkey scarf was just one of these very designs. Firstly, it is a cute garter stitch monkey scarf, but for an added dose of pure inspired awesome, the monkeys at the ends of the scarf are little pockets for warming your hands and storing peanuts. An absolutely perfect knit for any cheeky little boy… or girl. Or 31 year old Mimitron whose fingers are suffering from the wintry cold.

I only wanted the magazine for this one pattern, but I was rather surprised and pleased with many of the 36 included patterns in the £3.75 magazine. A good balance of garments, accessories and homewares in a mostly unfussy and classic style but with a modern twist, the patterns are divided into stylistic ‘themes’, taking a design feature, colour palette or some other shared point as the focus of miniature ‘collections’ of patterns.

One pattern in the ‘Heaven Sent’ section (a trio of patterns – blanket, soft toy and bootees – knit in soft pastel blue, pale beige and chocolate with blanket stitch detailing) caught my eye as a likely candidate for a pattern for a bunny rabbit that someone I knew happened to be on the lookout for. As it happened I was roped into the actual knitting of the bunny in the end, so his construction has been keeping my needles warm these last couple of days. 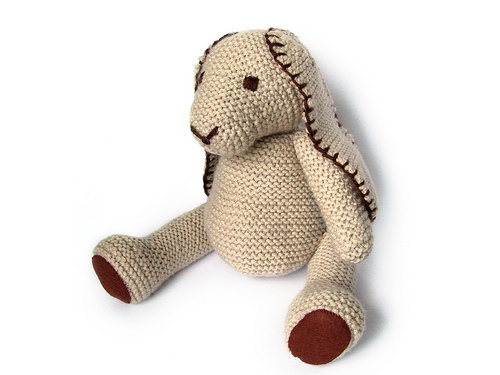 The pattern is simply written and easy to follow, but it does involve what seems like a marathon of seaming at the end. I’m actually one of those knitters that doesn’t mind seaming. In fact, I rather enjoy it most of the time, but there is something about seaming in garter stitch that is never quite as satisfying as the magically disappearing join between two pieces of stockinette as the two sides are slowly eased together to form an all but invisible line. What’s more, when I had constructed the body of the bunny from the front and back pieces, I managed to promptly forget which piece was which, and so had to make the decision of which way around the body should go. With one side slightly more ‘portly’ than the other, the rabbit was either going to have a very cushioned behind or a slightly rotund tum… I decided to let him have a little pot belly in the end, just because I thought it looked the most comical, and a best friend is never perfect, in my experience. Also, it is still Christmas, and someone has managed to finish off the stock of mince pies, and I frankly want someone other than myself to blame…

In case anyone is particularly astute and happened to notice, yes, he is missing an arm. I don’t know if I neglected to make a second or if I have misplaced it, but he is decidedly without at the moment, so I hope to be able to provide him with a replacement tomorrow, whilst trying to form for him a fluffy bunny tail at the same time. 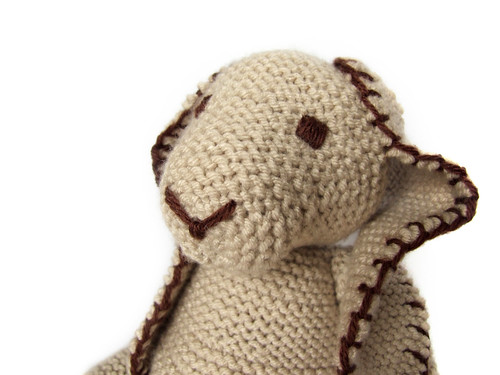