Oubliette, from the French ‘oublier’, to forget.

In the immortal words of Hoggle from The Labyrinth:

An Oubliette is a place you put people to forget about them.

I have an oubliette, not for casting away annoying people that have done me wrong, but for projects that just never came to be, for whatever reason. It’s not so much a dark and distant dungeon which I can walk away from to such a distance as to not hear the piteous sobs of what lies within, but a small cylindrical box that resides on my desk. 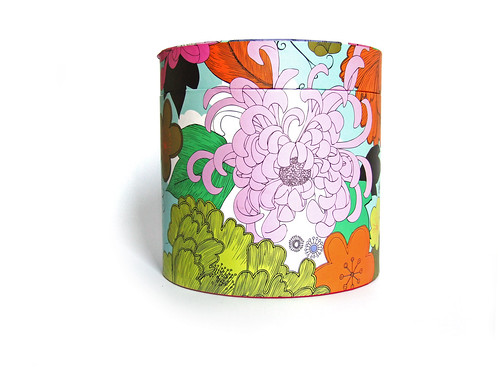 It’s a place I put knitting, to forget about it.

As long as items are concealed within I do not feel guilty about their unfinished state. ‘Out of sight, out of mind’ works just fine as far as I am concerned, but today I decided it was time to open up the oubliette and find what UFOs (unfinished objects) still resided within, and if they could be completed, salvaged, or if the yarn could be re-imagined in any way.

To be fair to myself I am a pretty monogamous knitter. Every now and then I will have to lay aside a complex piece of knitting, such as the Red Admiral I am working on, because I have a knitting deadline to meet (the current one being Christmas – how did that creep on on me?), but under normal circumstances I only have one project ‘on the needles’ at any one time.

Despite this I found a few things inside: 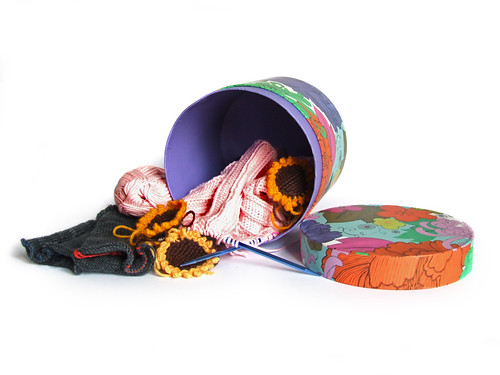 There’s the leg motif of the Pine Tree socks I was knitting for my brother-in-law, the rest of which I had ripped out to make some mitts for my mother (but I couldn’t bare to unravel the tree motif for some reason, and I found I had enough yarn to complete the mittens without doing so). There is also a half-finished hot-water bottle cover I was making out of pink cotton as comfort knitting when my Grandad passed away, and which I couldn’t bring myself to later complete as it somehow brought back the feelings of sadness I experienced as I knit when his death was imminent. I have decided to unravel the pink cotton and make a few fun and frivolous things for Christmas, to repurpose the yarn into small but cute things for a few of my siblings, to make the yarn into something happier.

Also in the oubliette were a few knitted sunflowers I had made from old yarn scraps that I didn’t want to throw away as waste, so I am going to have a think about how I can use those as embellishments on a project. Hoggle would be proud.