During what will go down in my personal history the ‘yarn drought’ of Late September 2009 I found myself slowly working towards my last ball of yarn. It was always going to be the very last ball of yarn I tackled, because I had made up my mind that it was decidedly unlovely, and something I did not want to resort to unless I had to – like the very last dry, stale biscuit as the stock cupboard runs dry. 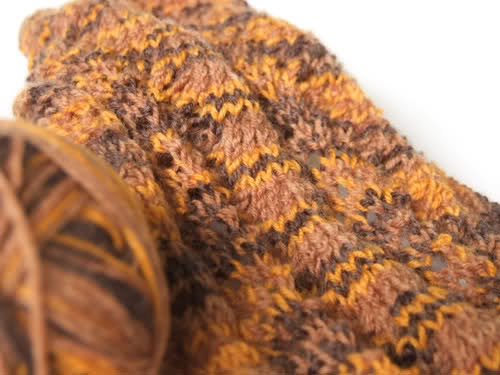 The yarn itself is not unlovely – it should be perfect for the season with its rich autumnal hues, but I am just so useless at working with it. I have tried many times – I cannot count the occasions on which this has been frustratingly unravelled and put back into the cupboard for ‘another time’. It was bought when I was but a brand new seedling with my single pair of needles, and I could see all of the possibilities of the forest of knitting laid out in front of me for the first time.

The fibres, the weights, the colours. A yarn shop was like walking into a grotto of jewels, as colours danced from the walls and treasure troves of tone and hue sat in baskets on tables. The choice was almost endless, and choosing a single colour all but an impossibility. 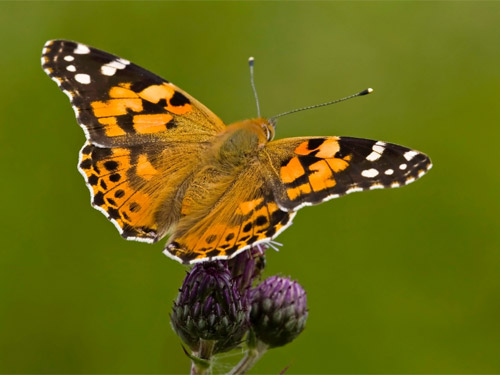 But… look this way, young apprentice, let me tempt you with the magic that is many colours in one ball.

This was too much… Of course I wanted a ball of yarn that was more than one colour, who wouldn’t? I saw this yarn and thought of Jaffa Cakes and the Red Admiral butterfly dancing around a summer meadow with his Painted Lady.

I didn’t understand what ‘pooling’ was, and this single skein and it’s many attempted blotchy outpourings scared me off of hand-painted yarns as I slowly and painfully learned that lesson many times over. Now – I know that many knitters love pooling – there is a long and on-going thread on the Ravelry Knitting and Crochet forums that will serve as proof of this fact, but it’s just not for me. I like to make the decisions with my knitting, not let the yarn decide what is going to happen, but I’m trying to find a compromise with this skein. It’s been my companion for long enough now for us to have reached a compromise, I feel.

I have asked if it would mind applying itself attractively to the Marialis End-to-End scarf from 101 One-Skein Wonders essentially a very simple feather and fan scarf with a moss stitch border. It’s not too pretty at the moment, but I’m hoping this is just the misshapen and lumpen caterpillar that it will unfurl its regal wings like a Painted Lady when the time comes for it to be blocked. Either that or turn into some Jaffa cakes – ether one would suffice.