Strap yourselves in, this post is likely to be quite long…

A few evenings ago I cast onto some exciting new needles with a head full of ideas and visions of projects. After casting on and knitting merrily away for a row or two I soon started to notice a tingling fatigue in my left hand, and a numbness which I’d liken to when you are riding on an old rattling bus and the seat is shaking, and the vibrations cause your fingers (and sometimes your bottom) to go numb.

Every row or so I found myself massaging my fingers and shaking some feeling back into my hand. A few rows later I put it down as my arm was aching and I felt a bit nauseous anyway – probably the result of a long and stressful day.

The next day after rudimentarily completing my chores to the satisfaction of a very casual observer, I grabbed all the accoutrements of knitting comfort and, wrapped in a blanket, got a bit of sneaky knitting done. About ten minutes into my knitting I found my left hand felt numb again, exactly as it had done the preceding evening. My fingers ached and I found myself unconsciously squeezing parts of my left hand to bring feeling back into it, and shaking my arm to try and rid the numbness and to dispel the aches that were working their way up from my forearm. I quite soon felt a bit sick of this. Actually, I felt a bit sick, full stop. I had another wave of nausea and had to lay my knitting aside for a second time.

This was odd. Actually, no, it was terrifying… Was my knitting somehow affecting my health? Was I becoming literally sick of knitting? No, I couldn’t be. It would be like Rolf Harris being sent into spasms at the sight of a paintbrush… This blog is called ‘Eskimimi Knits’ – not ‘Eskimimi sits and ruefully remembers the days when she could knit’. So what had changed? Was I knitting with a type of yarn that was new to me? Nope, so it couldn’t be that. Had I changed the way I was knitting, how I was sitting, the light conditions… Nope, nope, nope. The only thing I had changed was the needles, but it couldn’t be that. I mean, they were a bit ‘grabby’. Well, really quite grabby, actually. Size 3.5mm flexible acrylic needles… I’ve used plastic needles before, but these were a different form of plastic to those which I was used to. I found that the grip of the yarn on the needles was slowing my knitting down very considerably, that the stitches causing such friction in their ambition to move down the left needle that, combined with the flexibility of the material used for the needle, it was causing micro-vibrations down the length of the needle tip. Could those vibrations be what was making my hand numb and tingly, making my fatigued arm ache? I couldn’t see how this might be possible. I switched to wooden needle tips of the same size… Odd – I felt fine… Maybe it was just a passing wave of tiredness…both times… Hmm… It would be best to give those new tips another try just to make sure… Yes, it was back again. 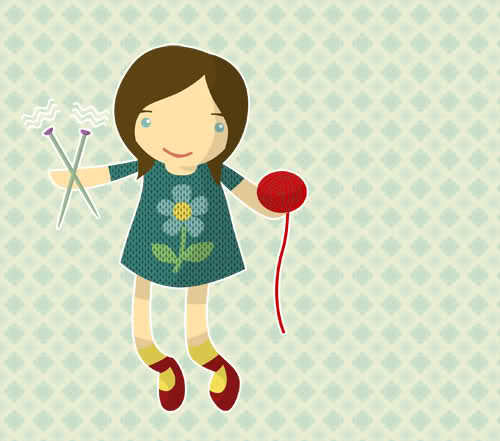 Multitasking by knitting and divining water
Luckily I know a friendly group of nerds who are always on hand to help research and investigate, like a large internet-enabled think-tank. They won’t mind me calling them nerds because they know I love them, and they are inescapably nerdy (‘Hi’ any Beex’ers that stumble this way…)

Some of the answers suggested are below…

Err, static electricity maybe? Van-de-Graaf generators use acrylic collectors and a belt made of silk or something like that. Could be whitefinger, but I don’t think that explains the nausea.

The vibration of the needle is at a frequency which is affecting your middle ear after a long enough of an exposure you are feeling sick in the same way you would if you were on a boat and the small sacs that dangle in your middle ear were aggravated by the motion of the boat.

The numbness in your arm is caused by the vibration and is unrelated.

Whilst I am unclear as to the actual vibration-inducing mechanism that’s at work here (probably a combination of low needle stiffness as you describe = low resonant frequency, lack of needle damping and slip-stick friction at the needle tips, combined with your particular needle grip, speed and the type of materials being used), what is clear from the symptoms you describe is that it’s not going to do you any favours in the long term.

The symptoms you describe (pins and needles, numbness, aching – finger blanching and coldness would be next) are classical early onset ‘vibration white finger’. Whilst it should be no problem if you stop now and shouldn’t be anything to worry about at this stage IMO, you don’t want to continue exposing yourself to this ‘occupational vibration’.

Here’s a linky for you:
http://en.wikipedia.org/wiki/Vibration_white_finger

[…] The pins and needles and numbness are classical early symptoms of neural stress and as you should know, an individual’s susceptibility to occupational vibration varies enormously.

And then the chief the science-nerd-in-residence pulled up this link for me to have a look at. Here, the blogger echos one of the science bods’ ideas about ‘vibration white finger’ – something which I had never before heard of, also mentioning that she was a sufferer of Reynaud’s syndrome. Bingo. I suffer from Reynaud’s syndrome. Actually, not so much as I used to – when I was at University I used to get it very often, but it was always triggered by cold – I had never heard of any other trigger for the symptoms, and now I have struck upon the possibility that I may have found a trigger for a similar condition in my knitting. Whatever the details of the problem may be, my needles seems to be vibrating under the friction caused by the reluctance of the stitches of the left needle to progress to the tip, and I seem rather sensitive to these vibrations.

I have since tried another size of the acrylic needle tips, and the much larger diameter of the needle (9mm) means that there is practically no flexibility in the needles at all. Though the needle is still vary grabby, the inflexible nature of the thicker needles means that the vibrations caused by the friction are not amplified as they are with the smaller needles.

So, now I am continuing with my project on my trusty wooden tips, and I shall pass the acrylic tips onto someone who can hopefully use them with more comfort than myself. I’ll also try to stop being so weird.

I’d like to thank my friends on the beexcellenttoeachother.com forums for their help, and their gentle jibing at my random problems.