I have never been able to understand why someone might knit a facecloth. That is, until I picked up an almost complete ball of Rowan’s new ‘Lenpur Linen’ at a charity shop for just 30p. My trusty miniature scales told me that this little purple ball of yarn weighed in at 42g, meaning I had 96m or thereabouts to try and make a project out of, so it was going to have to be something quite small. Firstly I had to work out what the heck ‘lenpur’ might be, and a bit of investigating revealed that it was ‘Rowanese’ for rayon (albeit rayon specifically from white fir cellulose). Having recently worked with some (bamboo-based) rayon I knew that it was very absorbent, and along with the linen content would have all the requisite properties required for a gift facecloth.

I found the pattern for Gwen Steege’s ‘Spa Set’ in the book 101 Luxury One-Skein Wonders – a fantastic depository of patterns for those short on ideas, time or money, and it just so happened that I was lacking in all three departments. 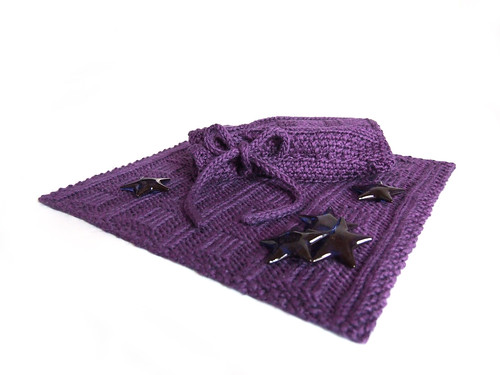 The yarn that the pattern called for had more meterage to the skein than a complete ball of Lenpur Linen would have done, and mine was part-used, so I didn’t know of I was going to have enough to complete the soap bag as well as the face-cloth, but I did in fact have plenty. I knit the actual graphic design of the face-cloth and small drawstring bag slightly differently from the way that the pattern prescribed completely out of pre-considered design choice because I was too lazy to read the instructions properly, omitting the seed stitch rows that run throughout the pattern. I made a few modifications to the bag as well – 10 rows of seed stitch were added to the open end of the bag, and a row of eyelets allowed for a thicker, three stitch i-cord to be threaded through a lot more comfortably. 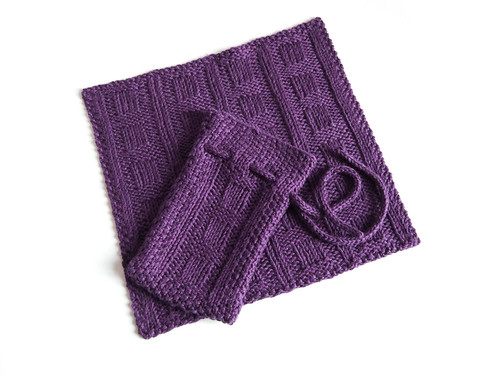 Though I cannot imagine ever knitting such an item for myself, I think it gives a nice spin on the tradition of luxury bathing goods (or ‘smellies’ as they are known in my family) as Christmas gifts, and not being too extravagant or showy I think it will make a nice gift for my brother’s girlfriend in a couple of months. I’m currently revelling in the fact that I have added to my completed gifts list. I think it is only right to celebrate by knitting something gorgeous for me.