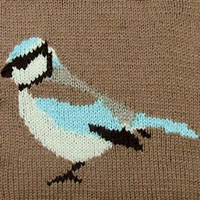 A few months ago the UK knitting magazine Yarn Forward published a series of patterns for mystery blankets squares, 6 each month, which were shown only as charts or written instructions, with no pictures of how the finished squares would look. I thought this would be a good project for me as the mixture of lace, cables, colourwork, beading and textured squares would mean a lot of variety within the project, allowing the knitter to end up with relatively large finished object without too much boredom. As each square was to be 8×8″ in size, it was quite easy to see that there was a large scope for making your own additional squares. I picked my colour palette (various browns and creams, and a pale turquoise) and cast on for my first squares toward making a large project.

I always like to have a blanket for comfort, so I decided to make this as a treat for myself, but soon my knitting had to be put aside for a while after the death of my beloved grandfather at the age of 97. I could not knit for a while, because my time knitting is a time when I can afford myself time to think, and to contemplate, and I could not bare to have that quiet reflective time when I was grieving.

When the occasion of the funeral had passed I slowly picked up my needles for time to time and dabbled in a square. Knitting became a comfort, as I hoped my blanket would be, but the thing I needed comforting from most was the loss my family had recently suffered.

I started to think of how I would like to knit a square in memory of my grandad, and how I would like it to symbolise what I loved about him. He was my father figure, mentor, teacher and greatest supporter. When I was young he’d take me anywhere I wanted to go – to the park, to the museum, to ride my bike. He’d fix the punctures in my tyres as well as the graze on my knee. One of the thing he’d love to do most was to go out and watch wild birds. He bought a heavy old pair of binoculars and we’d walk through fields, parks, woodlands – wherever we could find them. He’d explain about their songs, their migration paths, and we’d sketch them as he whistled their tunes back to them.

One of his favourite British wild birds was the bluetit, and I thought that this would make a fitting tribute to my beautiful grandfather. I’d already picked out my colour palette for the blanket, so some artistic license had to be taken with the colours, but as my box of crayons was always missing a few colours and we used what we could to make our sketches, I didn’t think he’d mind. 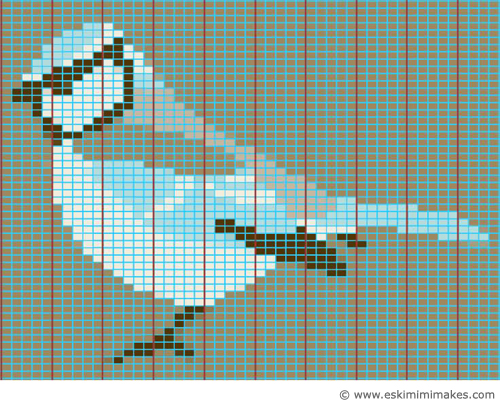 I think he’d have loved this design if he was still alive, but I also think he’d like me to have shared it, because he’d always want more of his feathered friends in the world.

A larger version of the chart can be viewed here. Extra plain rows can be added to the top or bottom of the chart if you wish to knit it into a square. 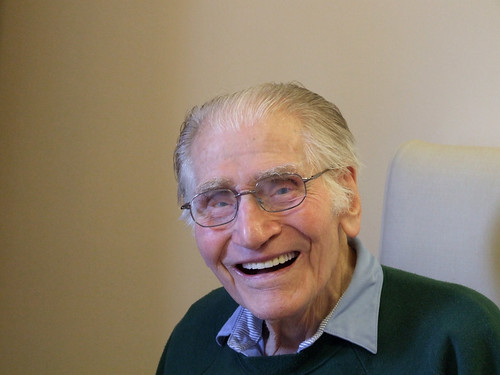