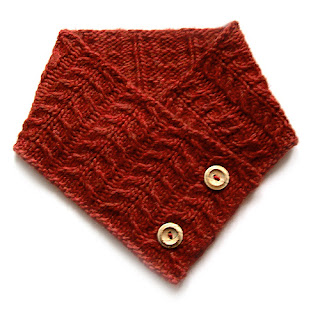 Last year, a few months after I had started to learn how to knit, and when the weather had started to turn cold as the first signs of winter approached, I turned my mind to the possibility of doing a bit of Christmas knitting. The person I most wanted to knit something for was my grandmother – a wonderful, kind and loving person who has spent so many hundreds of hours over the years at the sewing machine, making any and everything I could wish for.

After thinking on what to make her for a while I settled on scarf. She would often come in from a cold day saying how cod she felt around the neck of her coat. She also disliked the look of her neck (which is stupid as she looks wonderful), but would often put her hand to her throat self-consciously as she spoke to people. My grandmother never often wore scarves though, because as she has lived practically her whole life with only one working arm (after a terrible accident she had when she was just 3 years old) she found scarves unmanageable on a blustery day when they might start to slip and she was trying to carry her usual accompaniment of handbag and shopping. 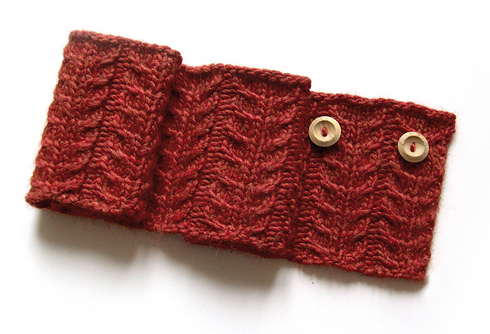 I decided I wanted to knit her something warm and elegant, made from something soft and luxurious, but mostly something which she would not have to worry about once she had put it on. I eventually settled on this shorter length scarf with no unnecessary ends. The double layer of fabric in the front of the neck keeps you warm no matter what neckline you are wearing, and the two buttons keep the scarf secure and comfortable.

Made from a soft, warm yarn this is an extremely fast knit and so it is perfect for quick or last-minute gifts, but it still shows that you have made an effort and made something beautiful. The gift is even nicer to give when it is for yourself. Note: It is recommended that you knit this scarf in a natural fibre as it does benefit from being blocked. 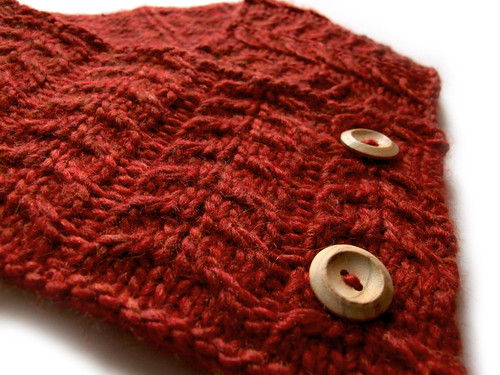